Separating the Facts From Fiction About Moving from California to Idaho Do you feel like your chance to live the American dream is fast waning?

Remember when you were a kid growing up in California? You had these big dreams for yourself. You probably wanted your own mansion, a few cars, and to enjoy a life filled with luxury while raising your family.

Now that you’re an adult, all that seems like a far-fetched dream. The house you always wanted is too expensive, and you’re struggling from paycheck to paycheck. 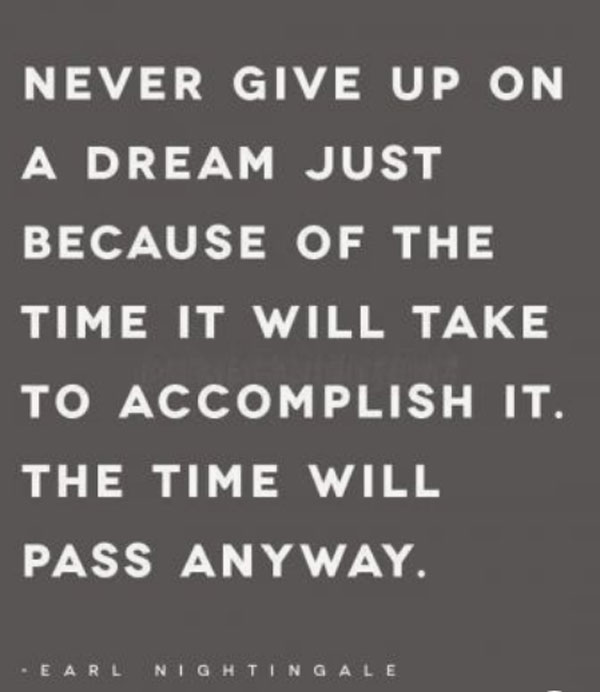 The good news is that it’s never too late to fulfill your dreams. Moving to Idaho from California offers you the chance to start your life afresh.

If you’ve been watching or reading the news lately, you might have noticed that Californians are moving to the Gem State in droves. Idaho was America’s fastest-growing state in 2019 with over 80,000 people making the move. The majority of these migrants relocated from California. 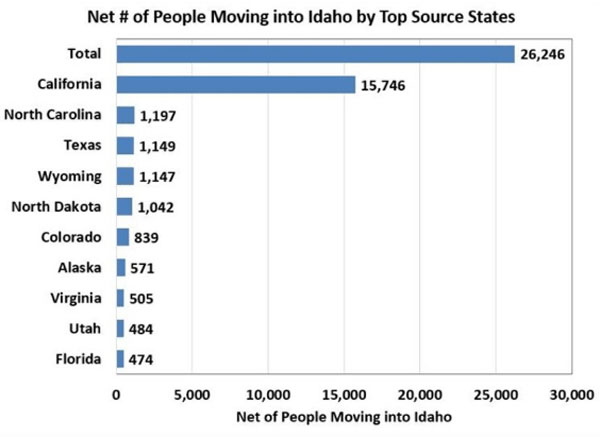 In this post, we discuss why Californians are moving to Idaho. We also present the facts and debunk the myths around relocating to Idaho.

Here’s a breakdown of what we are going to cover:

Why are Californians Moving to Idaho?

Let’s face it. Not everyone loves living life in the fast lane. The hustle and bustle of city life can take a toll on your peace of mind, subsequently making your life unbearable.

Some of the reasons why Californians are relocating to Idaho involve the high cost of living, dwindling job opportunities, heavy traffic, and the punitive tax laws in California.

Besides, California is prone to some of the most devastating catastrophes ranging from wildfires to earthquakes. Unless you have fire insurance, living in prone areas could make a significant dent in your finances. 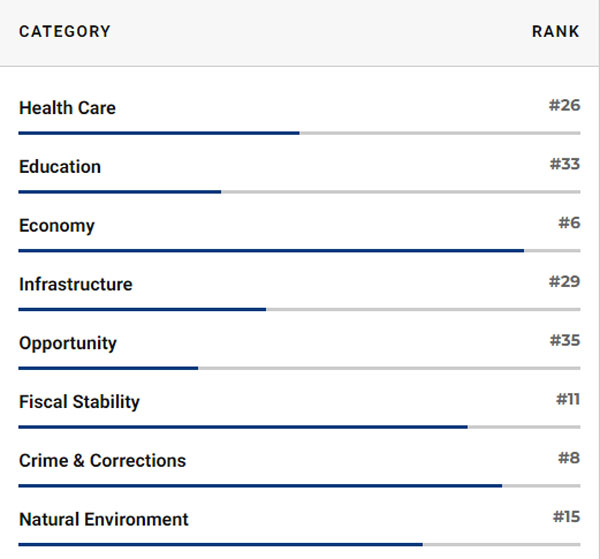 Idaho is the true definition of heaven on earth. The cost of living is lower compared to other states. Moreover, residents of the Gem State enjoy lower tax rates, affordable home prices, inexpensive healthcare, numerous job opportunities, and a higher quality of life.

So, it is not surprising that many folks are opting to relocate to other states around the country, with Texas and Idaho being the greatest beneficiaries of these migration patterns.

1. Idaho Is All About Potatoes

It’s true that Idaho is home to some of the best potato farms in the country and they account for a third of the state’s agricultural economy. In fact, potatoes are the cornerstone of Idaho’s identity.

Nevertheless, Idaho has since diversified into growing other crops and rearing livestock. Crops like beets, carrots, spinach, onions, turnips, chard, and peas are now common in the Gem State.

Interestingly, Idaho no longer relies on agriculture alone. The state has become an attractive destination for big tech companies, like Hewlett-Packard and  Micron Technology.

2. Most Idahoans are Crazy Mormons

The first non-indigenous settlers in the state were members of the Church of Jesus Christ of Latter-Day Saints. This explains why 24% of Idahoans are Mormons. However, this percentage clearly only represents less than a quarter of the entire population.

Then again, many people call Mormons crazy because of the numerous misconceptions surrounding this religion. Mormons are in fact nice, good-hearted people. They are always ready to go out of their way to offer a helping hand.

3. Idaho Is Entirely a Desert

The first thought that comes to mind when talking about Idaho is that it is an absolute desert.

The rest of the state is covered with beautiful scenery and breathtaking landscapes consisting of thick forests, rugged mountain ranges, and pristine, clear rivers.

4. Idahoans Are Resentful Toward Californians

In the last few years, Californians have accounted for over 60% of migrants fleeing the Golden State to Idaho. This has led to some sort of backlash from native residents of Idaho with some questioning the real motive of the migrating Californians.

Nevertheless, several reports suggest that the resentment has always been from a cultural perspective rather than an economic one. After all, the local economy stands to gain tenfold with the arrival of Californian migrants.

5. Idaho Is In The MidWest

Many people mistakenly assume that Idaho is a MidWestern state. The truth is that the “Gem of the Mountains” is in the Pacific Northwest. The United States Census Bureau classifies Idaho as one of the Mountain States. It borders Oregon, Washington, Utah, and Wyoming.

6. Idaho Is Full of Gun-Wielding Racists and Criminals

Another erroneous assumption is that Idaho is home to gun-wielding racists and criminals. However, nothing could be further from the truth. For the record, 91% of Idahoans are white. But just because the majority of residents are white does not make Idaho a racist state.

It’s true Idaho was once home to white supremacists, but things have changed with the younger generation becoming more educated tolerant of people of different racial backgrounds.

Speaking about crime, Idaho has one of the lowest crime rates in the country. You can always walk at night or leave your door open without worrying about theft or burglary.

8 Exciting Reasons Why Moving to Idaho is the Real Deal

You will never sleep hungry once you make the move to Idaho. Unlike California, Idaho has one of the lowest costs of living. Basic needs like food, clothing, and shelter are extremely affordable and readily available.

Besides, the cost of buying a house is cheaper than expected. No wonder, many Californians are making the move to the Gem State in droves.

If you love backpacking, kayaking, hiking, trail running, and other related outdoor activities, then Idaho is the ideal place for you. The state is popular with nature lovers thanks to its remarkable open spaces, rugged mountain ranges, and beautiful scenery.

The people of Idaho are not only welcoming but also friendly, despite the resentment towards migrants witnessed in the past. Once you understand and appreciate the culture of Idahoans, you will realize just how respectful they are toward other people.

From property insurance to auto insurance, Idaho enjoys some of the lowest rates in the country. Home insurance costs in Idaho are as low as $400 per year, but this depends on your exact location and your insurer. Big cities like Boise attract the highest rates, but still manage to remain within an affordable range.

By now you already know that Idaho is one of the safest states in the United States. Only 2% of the population have reported violent crime in the last 12 months. However, property crime remains at 14%, which is reason enough to purchase property insurance coverage from a reputable insurer.

If your search for a job in California ended in naught, then moving to Idaho could just be the big break you have been looking for.

Idaho has an extremely low unemployment rate compared to the rest of the country. The state ranks 13th as one of the most favorable places to find a job.

From working in the fields to grinding with the big bosses, Idaho has excellent opportunities for job seekers.

Idaho has some of the best roads and interstate highways connecting the state to other regions of the country. Moreover, all public roads and highways are well-maintained by the relevant agencies with no additional charges tolled to road users.

8. A Variety of Places to Stay and Work

When thinking about moving to Idaho, the first city that comes to mind is Boise. Well, Boise is the capital city and it is the largest cultural and educational center. However, migrants have so many options as far as places to live and work are concerned.

As the popularity of Boise continues to soar, it is only a matter of time before the cost of living in the capital rises. To avoid relocating again, we suggest you look for a home in other smaller towns and cities like Idaho Falls, Twin Fall, Nampa, or Moscow.

1. Idaho is not a place for singles

Idaho has one of the highest marriage rates. So, if you are single, you may have a hard time finding your soulmate.

2. The weather can be extreme

The weather in Idaho is unpredictable and it can sometimes be extreme depending on the location. The northern part experiences very hot summers and cold winters, making it unsuitable for weather-conscious individuals.

Stereotyping is very common in Idaho. Some people may profile you according to your accent or how you speak and behave.

While Idaho has an impressive transport system, commuting from one town to the next can be expensive compared to states like California.

Owning a Home in Idaho

Idaho has a reputation for wide open spaces, the great outdoors, friendly people, and a stress-free lifestyle. But most importantly, Idaho has some of the most affordable home prices in the entire nation.

Did you know that Idaho has one of the highest homeownership rates in the country?

If you’ve always been dreaming of owning a house, then this is your chance to become a homeowner. The median home price in Idaho stands at $263,900, which is far below the national median price of $329,000 as of July 2020.

Houses in California are extremely expensive and out of reach for many ordinary residents. The median home price as of 2019 was a staggering $706,900. With this amount, you can buy up to three different homes in Idaho’s main cities.

If you consider the amount of money you have to pay for home insurance and other necessary expenses, it makes a lot of sense to relocate and buy a house in Idaho.

The process of owning a home can be a long, protracted journey. Moreover, homeownership does not end the moment you sign the sale agreement. You still have to consider important expenses such as homeowners insurance.

The importance of having homeowners insurance can never be underestimated and protects your property and valuable belongings from damage or loss.

Unfortunately, home insurance rates have been on the rise across the country in recent times. This is amid the pandemic and the rising cost of living.

This means you do not have to pay exorbitant fees to cover your home and meet your insurance obligations.

Ready to Make a Move?

Moving to Idaho from California could be one of the best decisions you’ll ever make. After all, life in Idaho is super easy with nothing much to worry about. Besides, the people are friendly and there are plenty of jobs available.

Most importantly, you could become a homeowner much faster than you expect.

So, what are you waiting for? Are you ready to make the move? Talk to Old Harbor Insurance about the best homeowners insurance policies for your new residence.